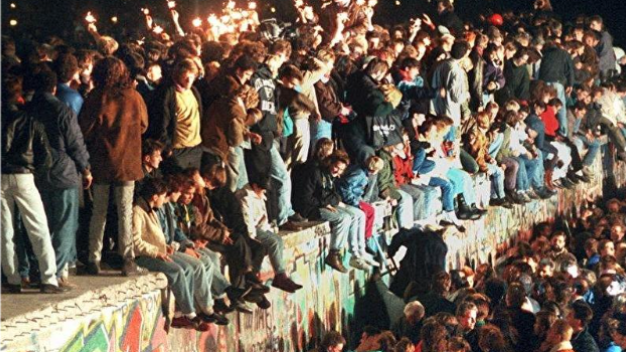 Dear Global Self-Reggers: We Are All Ukrainian

This picture has stayed with me all these years. It was taken on Nov 9, 1989: the night that the Berlin Wall came down. Crowds spontaneously gather to celebrate this incredible moment together.

2.5 million East Germans had fled to the west before the wall went up. It was a shocking indictment of Stalin’s strongly held belief that the “liberated” countries would joyously welcome the new Soviet regime. There are many reasons why the exact opposite happened: not least, the stunning impact of the Marshall Plan, which Stalin ultimately refused to join, and the democratic approach to democratization that the US adopted.

The subjugated nations of the Warsaw Pact were exactly that: hostages to the dictates and demands emanating from Moscow. Abiding resentment festered, as was seen in East Germany in 1953, Hungary in 1956, Czechoslovakia in 1968, Poland in 1980, and Berlin in 1989.

And here is Putin suffering from the same delusion as Stalin. Perhaps he expected that the invading Russian troops would be greeted with flowers strewn in their way. Instead, they were met with fierce resistance, forcing Putin, like Stalin before him, to resort to Plan B. Sheer terror. Mariupol, according to the governor of the Donetsk region, has been “wiped off the face of the earth.” Yet still, its troops continue to fight. Still, the Ukrainian people refuse to submit.

We are all transfixed by this David vs Goliath battle. But this is more than a case of being spellbound. The Ukrainian people’s battle is touching something deep inside all of us.

It’s commonly said that the Berlin Wall was unique insofar as it was built to keep its citizens in rather than the barbarians out. But the fact is that authoritarian governments build all sorts of walls to confine their inhabitants. Concrete walls with barbed wire. Firewalls to prevent the free exchange of ideas. Legal walls, to prevent the marginalized from voting. And especially, the invisible wall of fear.

Around the world we see small groups determined to seize power and impose their will on the rest of the population. They think that the Enlightenment has been the source of inexorable social decline. What society needs is not freedom but order. From this perspective, stealing an election is not a crime but an act of correcting a huge historical error.

But freedom is not simply an Enlightenment value. It is our deepest human need, ensconced in the midbrain. Restraint triggers RAGE, as you can see only too clearly by simply holding a baby’s arms to its side.

Rousseau was only partly right. We are not all born free, but all born with the desire to be free. To make our own life choices. I write these words at the very moment that we are celebrating Passover. The whole point of Passover is to remember what slavery feels like so as to relish the precious gift of freedom. And to realize when freedom is slipping away, such as is happening today with reactionary forces sweeping the west.

To be a truly free nation is to internalize the moral code. To behave in a just and charitable way, not because we have been commanded to do so, but because we choose to do so. And to make that choice because of the kind of society we want our children and our children’s children to inherit.

Search as hard as you will, you will not find a word for obedience in the Old Testament. What you will find instead, over and over, is the word, Shema. It means listening: resonating with the voice of another human being, hearing the tiny small voice inside you telling you what is right and just.

Putin cannot hear that voice. But the rest of us do, which is why we are so moved and so invested in what is happening in Ukraine.

This picture was taken in Kyiv, as thousands marched for their freedom.

This image was taken in London.

And this image was taken in Toronto, near where I live:

To adapt a line from JFK, Wir sind alle ukrainischen.